You are here: Home › North Korea

A contact in the Pentagon asked for a cheat sheet on nuclear technology. Putting something together that is technically correct and concise, while introducing all the policy-relevant terminology is a challenge. Matthias, John, any suggestions/corrections?

There are two “pathways” to the bomb: uranium enrichment and plutonium.

1. Uranium enrichment
Natural uranium is plentiful in nature, but to be weaponized it must be converted into a form that can be used to sustain a nuclear chain reaction, the physical process that releases energy. This 15 minute video from the 1950’s is my favorite explanation of nuclear fission: A is for Atom

Natural uranium is made up almost entirely of two isotopes, one of which is the slightest bit heavier than the other. Only the lighter isotope, U-235, is useful for sustaining a chain reaction. Fortunately, at least from a nonproliferation perspective, natural uranium is 99.3% U-238, so in order to be weapons usable it must be “enriched” to separate out the desirable U-235 from the undesirable U-238–or fed into a Heavy Water Reactor, which I will come back to when I explain the plutonium pathway.

The process of enrichment is mechanical. Natural uranium in its gaseous form (UF6) is fed into a centrifuge:

Because U-235 is lighter than U-238, when you spin UF6 the heavier U-238 flies toward the outside wall and collects in the bottom of the centrifuge. The “depleted” stream of U-238 can then be funneled out. The enriched uranium, U-235 along with the remaining U-238, is siphoned off and into another centrifuge. The process is repeated thousands and thousands of times until the desired level of enrichment is achieved.

At first the enrichment process goes very slowly. Getting from the .7% U-235 found in natural uranium to 3-4.5%–the minimum amount necessary to fuel a light water reactor–requires 70% of the time and effort it would take to produce weapons-grade material (90% U-235). By the time uranium is enriched to 20% U-235, you are already 85-90% of the way there. This is why the cut-off for what counts as low enriched uranium (LEU) is set just below 20%. There are no reactors that require more than 20% enrichment and if you go any higher you basically already have what you need to create a bomb. (Jeffrey Lewis has a nice post about this on Arms Control Wonk.)

2. Plutonium
Plutonium, in theory, could appear in nature. However, in practice, it must be generated through a nuclear chain reaction. All nuclear reactors produce plutonium, but there are many kinds of reactors and some are better for plutonium production than others. If a country wants to build a nuclear explosive device without having to enrich uranium, it can use a heavy water reactor. Unlike light water reactors, which are cooled with regular old H2O, heavy water reactors are cooled with water that has an extra isotope of hydrogen (D20), which enables natural uranium to sustain a nuclear chain reaction. The plutonium necessary for a bomb can then be separated out from the spent fuel. This is what North Korea did.

Iran has uranium enrichment facilities, a heavy water research reactor and another under construction, and light water reactors for training purposes and energy production. For more information than you will possibly need on Iran’s nuclear sites visit ISIS’s page on Nuclear Iran. 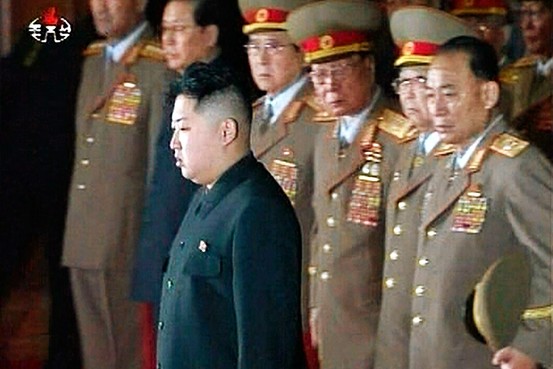 My initial response to the media coverage of North Koreans wailing in public demonstrations of mourning over the death dictator Kim Jong Il was that it appeared bizarre to the point of being almost unintelligible. I’m familiar with ritualized wailing, but media coverage of it is still jarring:

This behavior has received a lot of media attention in America, and in other parts of the world too I assume, perhaps because it is so difficult for Americans to interpret. The most common reaction is to think that the North Koreans can’t possibly be serious, and yet some of these people are pretty convincing:

The mystery deepens once you combine the ritualized wailing with reports about the role of myth making propaganda in ensuring a smooth transition of power to Kim Jong Il’s son, Kim Jong Eun, as explained in the WSJ (link to full article here):

“Myth-building in North Korea is a serious business. Analysts say it is critical for the regime to ensure that the personality cult of the Kim family remains intact and its rule unchallenged.”

My personal favorite is the one about North Korea’s founder, Kim Il Sung, who was, “said to have made a hand grenade from a pine cone to blow up an American tank.” The claim that natural wonders have occurred in conjunction with significant events is also good:

“…when Kim Jong Il was born, propagandists reported that the sky was filled with lightening and thunder, as well as a rainbow.

As recently as Wednesday, Korea Central News Agency reported many natural wonders observed around the country, such as the sky turning red and a huge snowstorm suddenly stopping, as the people mourned their dead leader.”

The mystery started to unravel when I read the following quote from a North Korean defector: “‘The regime has to keep doing it, regardless of whether people believe it or not, because they need to establish the legitimacy of the family…”

The key lies in the fact that whether or not people actually believe in the myth of the Kim dynasty is irrelevant. As long as they continue to act as if they believe, the legitimacy of the regime remains in tact. This is exactly the same dynamic I point to in my analysis of nuclear fetishism.

I often use the example of a king to illustrate the practice of fetishism. A king is a king only in so far as his subjects submit to his rule. Yet, the claim to divine ordination passed through the hereditary characteristics of royal blood makes the power of the king appear inevitable–as if he would be a king even outside his relation to his subjects.

North Korea is one of the few true nation-states left on earth that still has an entire social and political system build on a racialized concept of social hierarchy in which divine right is supported by founding myths. Kim Jong Il is North Korea’s national fetish object. The sense of wonder that outsiders experience as they witness the ritualized practice of public mourning is entirely consistent with the experience of fetishism. What people like me don’t understand when we watch these ritualized practices is that for the people engaged in them, whether they believe or not is not entirely relevant. What is important is that as a collective experience their behavior is both powerful and normal.

The vision of a world in which nuclear weapons no longer functioned as the United States’ national fetish object would be characterized by a similar sense of bewilderment at the ritualized practice of nuclear deterrence. It would be populated by people who learned about the history of nuclear deterrence and thought, “It’s so crazy that they actually thought those weapons made them safer.”